Ever wanted to share some long text with your friends, or maybe some code that might include a token or two? Usually, you will probably consider using a free text bin like pastebin or hastebin, but neither of them is encrypted. However they offer great and accessible UIs as well as code highlighting.

That’s where BeardBin comes in, a Zero-Knowledge Encrypted Text/Code sharing bin. There are two parts to it:

Since backend has a tiny role in the whole project, I focused on speed, that’s why I went with Crystal and Kemal, a super fast web framework that can handle huge amounts of requests per second.

Let’s create a simple record that will act as a mongodb document.

The rest of the code is handling the post requests to the /create, /retrieve and /delete endpoints, doing the necessary calls to the database and sending responses with correct status codes.

Lastly, the backend also handles view_once, which will delete the document just before sending it to the user.

The frontend handles both encryption and decryption of the content. Why? Because you don’t have to trust the server (and the network) when they are being done client-side.

Having a clear spec on the encryption is important both for users and to keep us on track.

(If it looks weird, check it on GitHub)

The decryption key is on the url itself, allowing anyone with the url to decrypt the content (unless it has a custom password set on top).

Enough of that, let’s go back to coding! We need to add some plugins to Vue before we start:

I won’t go through all the components since they are a lot, but they mostly accept user input which then gets set in Vuex.

You can access those params like this: this.$route.params.<param_name>. So on mounted, we save both the id and decryption on store, allowing all components to easily access them. After that, we show the correct modal (if required) based on whether or not the bin has a custom password, there’s something missing or the /delete endpoint was called.

Encryption (and decryption) are being handled by CryptoJS.

Since we are using AES for the base encryption, we need to generate an IV. The IV doesn’t have to be secret as long as it’s random for each entry. That’s why it’s saved as plain text in the database. To generate it, we use CryptoJS’ WordArrays.

A WordArray object represents an array of 32-bit words.

Afterwards we need to create a secure key to encrypt with PBKDF2.

In combination with secure-random-password and a random WordArray as a salt, we generate a PBKDF2 key with the size of 512 / 32 and 1000 iterations.

Then we use both the PBKDF2 key and the IV generated above to encrypt the user content.

Lastly, if there’s a custom password set, we encrypt the already encrypted content using RABBIT with it. And of course, we send the required info to the backend and show the user a modal that contains the URL of the Bin plus the deletion key.

Decryption works in a similar manner, but in reverse.

If the content has a custom password, the user gets asked to input it on mounted. So now the content is no longer RABBIT encrypted and we can continue with the AES decryption.

After the content gets AES decrypted using the decryption key from the URL and the IV from the backend, it gets saved in store so the TextArea can access it.

If the Bin was marked as code, the content will pass through highlight.js with auto-detector in an attempt to detect and correctly highlight it.

While there are many parts and layers to this project, I decided to mention only the most critical ones. Privacy is important, including on things we don’t usually think about. 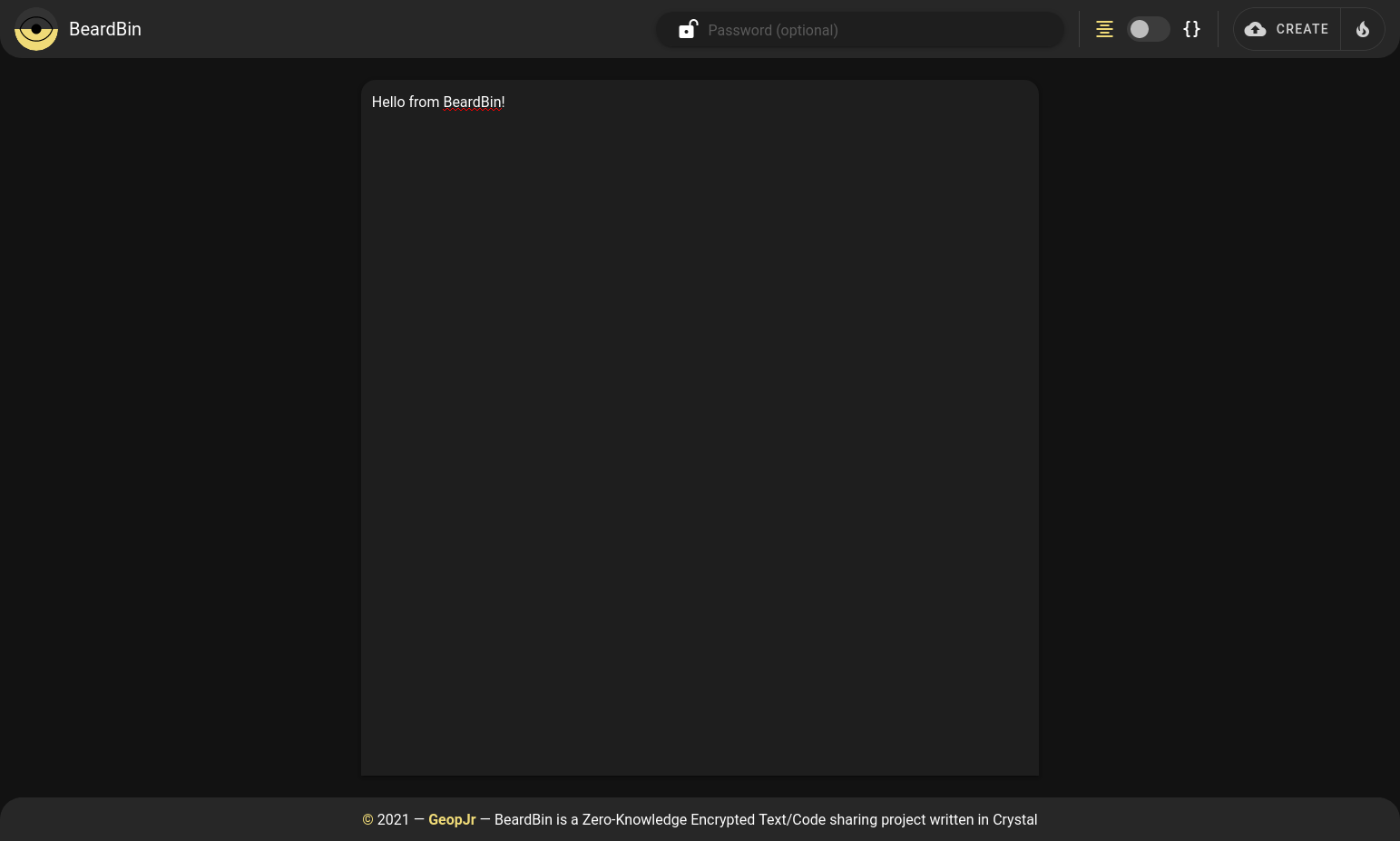 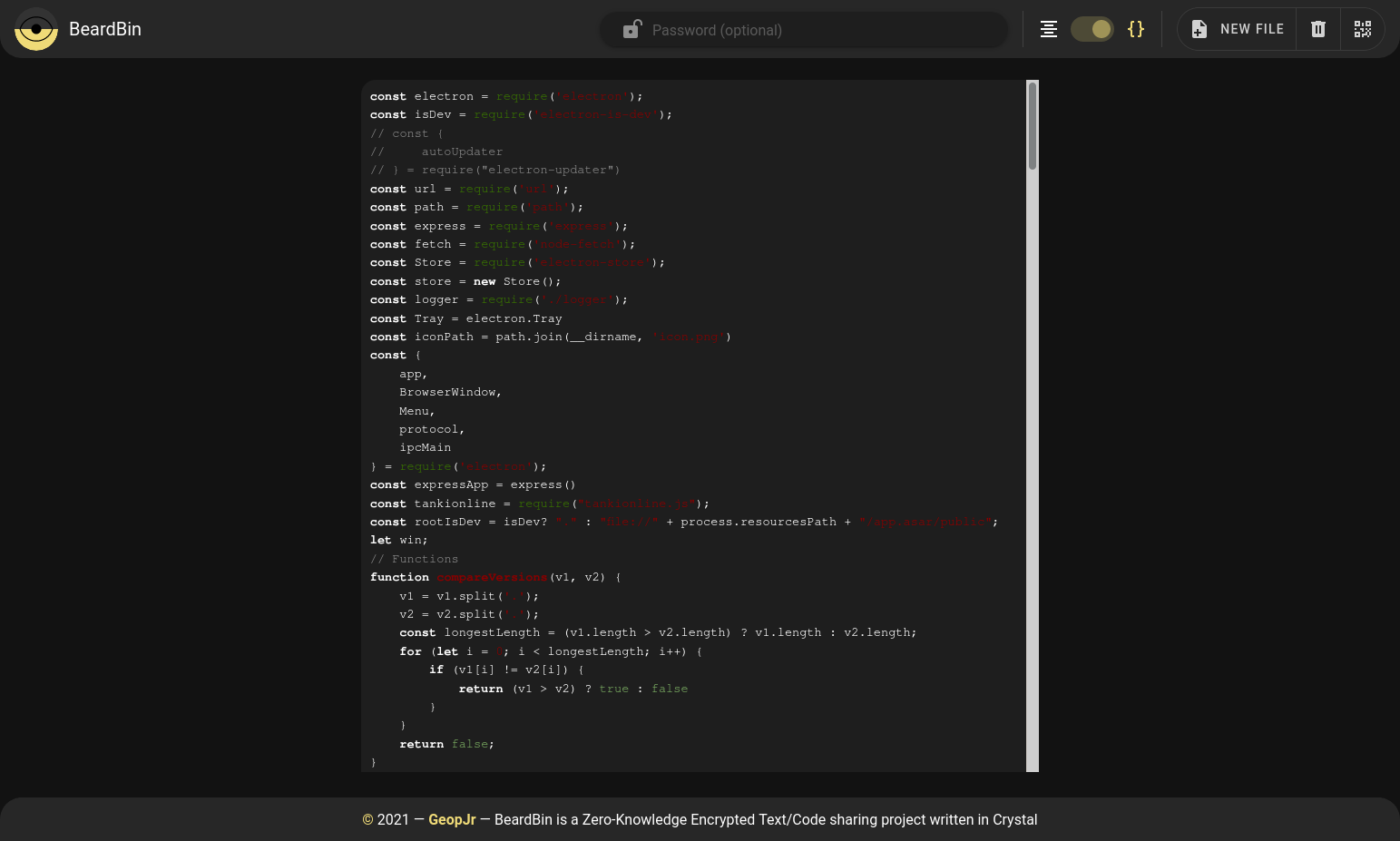 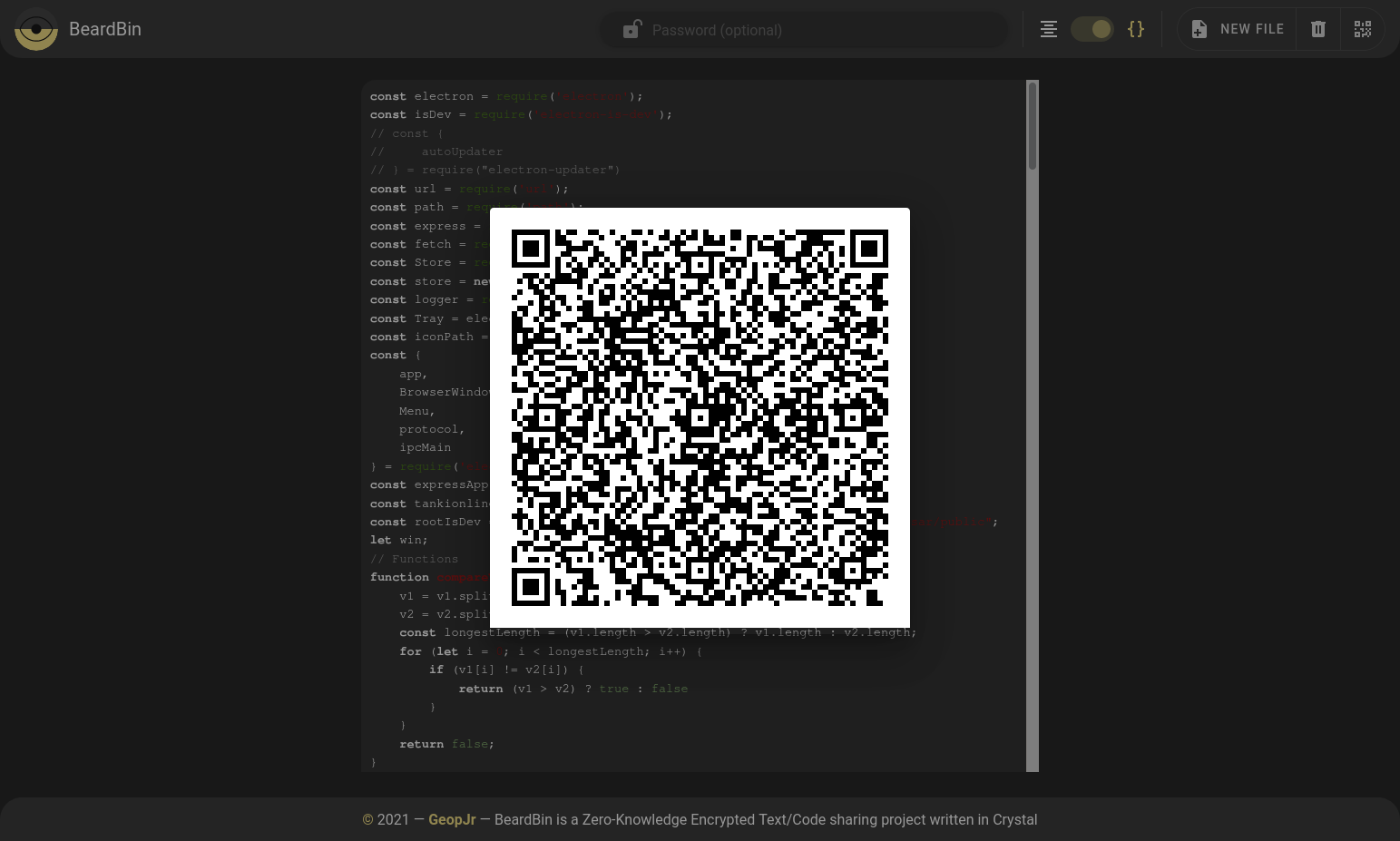 I have an instance of BeardBin running on a heroku VPS, but since the domain might change anytime, you should grab it from the GitHub repo (it’s on the sidebar).